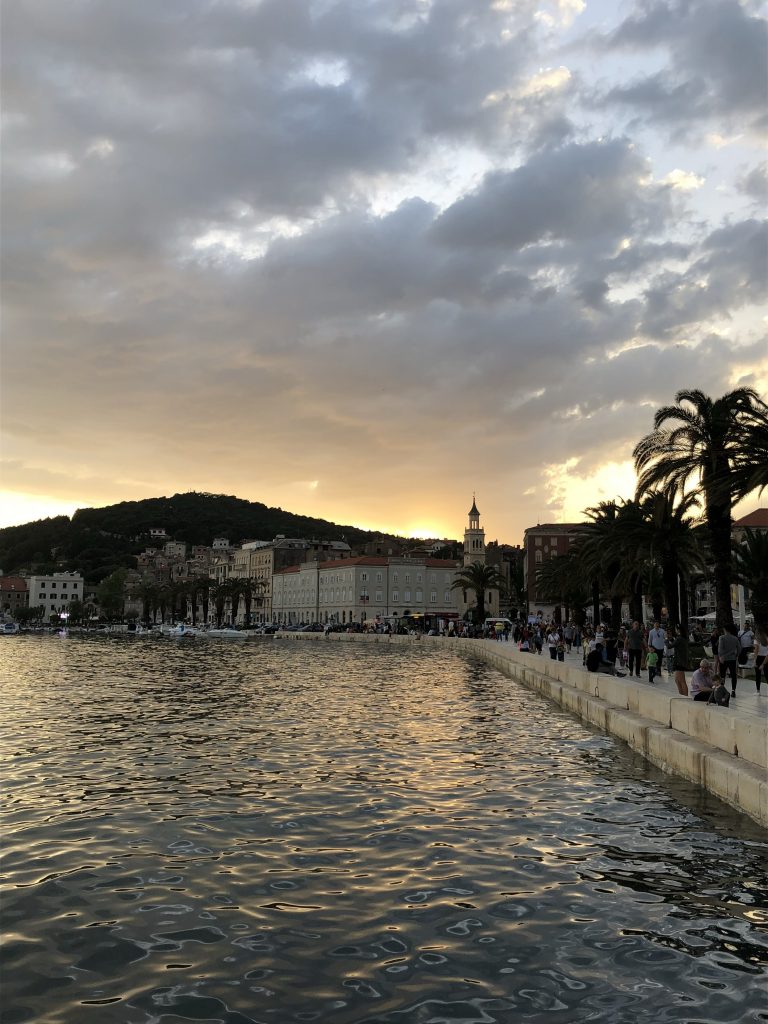 Have you been to Croatia?

It had been on my radar for years, and what better excuse to explore than our ten year anniversary! Our 2&3 year old boys joined our ambitious itinerary of covering four cities in one week, and we all had a blast.

Here is our recommended route for easily covering the Dalmatian country-

Some people will claim it's the coolest city along the Dalmatian coast. The rich history and natural beauty will be enough to satisfy your Croatian thirst. The Monument to the Sun is a fabulous place to sit and gaze at the sunset. It's also interactive and was a huge hit for the kiddos. As you run across, it lights up and responds to your movement. Crazy cool!

Along the edge is the super famous Sea Organ and #1 rated attraction in Zadar. There are creatively cut steps forming into the water along the promenade. As the waves roll in, the underwater pipes fill and exhale with water making a soothing harmonica sound. They play a meditative 7 chords of 5 tones from 35 pipes installed underneath the stairs. The air inside is pushed up and out by the incoming crashing waves. The boys being so young and full of energy, they too, even sat down to listen and stare at the peaceful ocean. It's not to be missed!

Plenty of ruins are peppered throughout the city. Some you can climb, which the kids will revel in, and others are roped off and charge an entry fee to explore.

The 9th-century, Byzantine-style, Church of St. Donatus is one not to miss. You can climb the accompanying tower next door, which dates back to the 12th century. Breathtaking views of the harbor await you atop.

My absolute favorite restaurant in Zadar is Restoran Bruschetta. And if you like sauvignon blanc wine, do yourself a favor and order a Galic while there. It's local, and you will NOT be disappointed!

Fresh food, spectacular wine, and fantastic for kids. It was highly recommended by our AirBnB host, and it certainly didn't disappoint! Another reason I highly recommend going the AirBnB route. Much more of a personal touch with the owners instead of receptionist in the hotel lobby.

Overall, Zadar was a spectacular place for our introduction to Croatia. It's centrally located if you want to explore further: north to Zagreb or south to Dubrovnik. The latter was next on our list of places to spend the night. But first...

We rented a car in Zadar for our adventure along the Dalmatian coast, and our first stop was Krka. The waterfalls in Croatia are mind-blowing, and we were fortunate to experience a pretty epic one. On our way to Dubrovnik, we made a half-day stop in Krka to swim in the majestic waterfall. And holy cow! I'm so glad we did.

There are five entrances to Krka National Park. The most popular are Skradinski Buk and Roski Slap. However, there is free parking at Lozovac. Krka National Park entry fee is 20 euros during high season or 150 kunas (Croatian currency). If you are a hiker and nature lover, there is an incredible trail from the Lozovac entrance which is 875 meters (1/2 mile) in length. We would've chosen this option over the boat if we didn't have little people in tow.

Parents' Travel Tip: Krka National Park is NOT stroller friendly! Be prepared to wear the babies or carry the toddlers.

The line to get on the boat, and likewise back to our car was completely redonculous. The three year old ended up sitting on my foot because he was so tired, and the two year old completely passed out in my arms for a solid hour. Eeek!

After slowly tip-toeing around the edge of the slippery lake, we found a decent spot to toss our towels and dip our toes. Well...and let the three year old loose for a bit.

After taking in the beauty of the lower falls, we hiked about a mile up the cliffside to get a peek at the expansiveness of this wonder. We were in awe!

As I mentioned up top, we patiently waited our turn for the return ferry. After living in buttoned-up organized Germany, THIS drove me crazy. No particular line or roped off way to congregate. People were pushing in from the sides or walking around through the woods to break in line. Ugh. Please don't be like those people. Remember kindergarten? Wait your turn!

Back on the road and hoping to reach Dubrovnik before nightfall; we first had to cross into and out of another country...

We didn't have reservations for a stop over nor time for a meal, but driving through was breathtakingly beautiful. The small country has an even smaller coastline. And if you look at a map, it actually breaks up Croatia. So you either have to drive through Bosnia or sail around the tip of the tiny country to reach the south end of Croatia. Kinda crazy but was cool for us and our road trip. Also, Mostar was highly recommended to us, but unfortunately, we didn't have time to stop. If you are interested, 5-star accommodation can be booked for $80/night. The smidge we were able to drive through was beautiful!

And since B&H isn't part of the EU, we had to wait in line to have our passports examined/stamped by custom officials before driving on.

Side Note: if you are driving through the EU, you can cross borders with no problem. Going from one country to the next, there is no difference in one side of the road to the other. But if you approach a border country that isn't affiliated with the EU, then you must stop for clearance to enter.

Next up on our road trip of easily covering Croatia was the capital city of Dubrovnik. Ahhh, yes. The azure blue waters and rocky cliff coastline was mesmerizing. And to swim here? Dreamy! I mean, who wouldn't love gazing at castle ruins while floating in this? It was one of our favorite family experiences.

I use to teach history and LOVE places chock full of the good stuff. And this place? Rightfully so, since it dates back to the 6th century as part of the Holy Roman Empire. It went through significant changes over the centuries belonging to different countries, and now remains the seat of Croatia.

The walls themselves date back to the 16th century! Having a walk along the top is definitely something to put at the top of your daytime itinerary. Keep an eye out for the brave and curious little ones, though, as the walls aren't much higher than my waist in some places.

A full walkthrough will take as much as two hours, but it is without a doubt the best way to see Dubrovnik.

The nooks, crannies, and staircases (!) of the Old Town are remarkable ways to see the city down below.

We actually got lost one night wandering through the maze of connected neighborhood pathways.

Stroll along the Stradun. We did this during the day but came back once it was dark. This is the main street in the Old Town. Lots of delicious restaurants, shops, cafes, and ice cream bars to choose from. I HIGHLY recommend seeing the Old Town at night. It looks like a curated movie set. The cobblestone streets glisten and shine from years of polishing underfoot. My amazement came from every single stone being the same gorgeous light color. It almost seemed as though the thoroughfares were painted.

Travel Tip: Always always carry a map! You never know when cell service will drop, your phone will lose battery, and there is no one in sight that speaks your language. Remembering this was HUGE that particular night!

Game of Thrones fans will be thrilled!

The food is a major draw of Croatia in general, but Dubrovnik has some pretty magical spots to dine. We didn't realize how fancy this place would be for small children upon entering, but could not leave once on the terrace. I mean, check out this view! King's Landing and the ocean...swoon. Be sure to stop by Restaurant Posat if you are in town.

We had a pretty spectacular time in the capital city. I would recommend at least two days to see the highlights. Any less and you would be shorting yourself from some real gems.

Lastly, we rounded out our trip by heading back north. Halfway between Dubrovnik and Zadar lands you in the harbor town of Split. This was our final destination and a great one to end on.

The second largest city in Croatia was founded back in 3rd century BC. It later became home to the famous Diocletian's Palace, which was constructed in 305 AD for the Roman Emperor. We were fortunate to stay in a partially renovated section of the walls to the palace. That's right, the actual WALLS to the palace have been transformed into tiny studio, dungeon-type apartments. One of the coolest accommodations we've ever had the opportunity of staying, and I most definitely recommend!

Wandering the palace, surrounding ruins, and eating our way through Split was how we decided to best spend our last day in Croatia. However, the city is also best known for its sports. Split has produced numerous world-famous athletes and also houses a few, well-known stadiums and arenas.

Overall, we had many amazing adventures during our road trip through Croatia. Four cities, seven days, and two toddling babes made it a whirlwind extravaganza for sure. I would've added a couple more days to truly soak in the experience, but I was crazy happy with what we were able to fit in.

Croatia was a bucket list item for over a decade. Celebrating our 10 year anniversary there was a dream come true, especially sharing the adventure as a family.

It is more than idyllic beaches. This central European country has it all, and the best part - Croatia is super affordable, and you can easily cover Croatia in seven days. There is adventure, charm, culture, and lots of nature. I give it a high five all around! Let me know if you have questions about any of the cities or traveling through the country. You can reach me through the 'contact me' tab. Happy to help!

And don't forget to subscribe to my newsletter below for all the best tips in your upcoming summer travel! Domestic or international, I've got you covered.

The Gritty City of Hanoi with Kids
Swoon Over Switzerland