Chasing the Sun in Malta 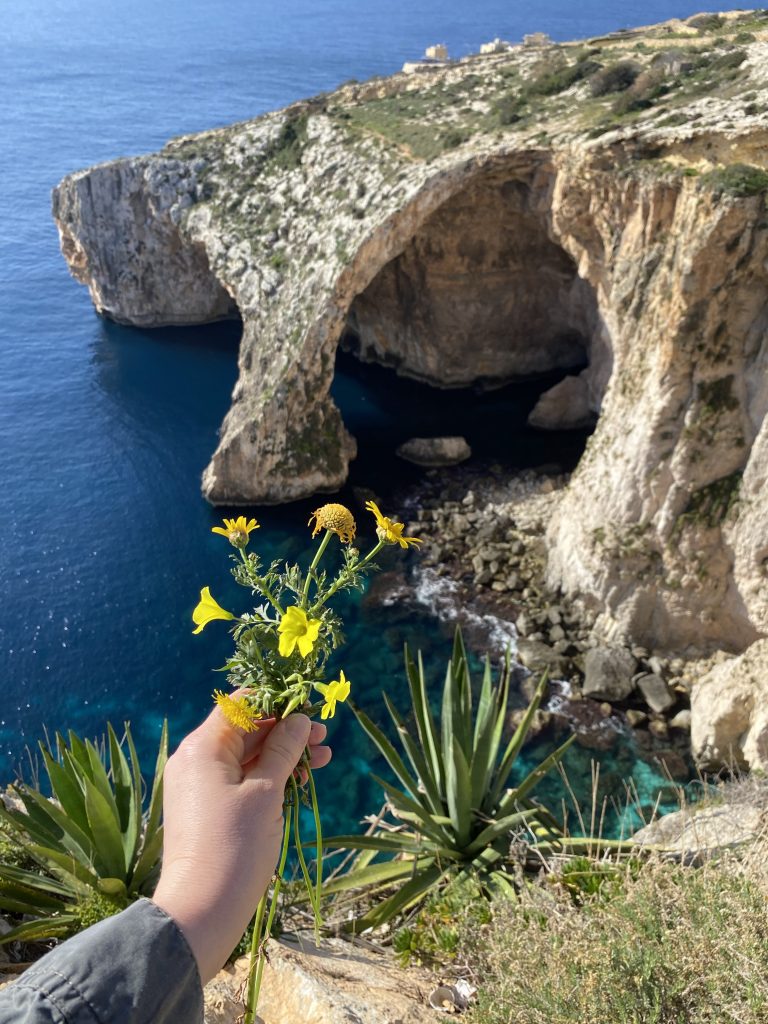 Literally...chasing the sun is all we did!

When you live in Germany and don't see the big, golden, warm globe for a solid three months, you go after it. And after it we did. Hubs found 20 euro round trip tickets and pretty much booked it on the spot. YES. 20 EUROS! After spending one winter in Germany, you learn fast. We needed a break from the cold, grey suck that is winter in Bavaria. Same as usual, a fabulous AirBnB was spotted and the tickets were booked a few days later. A new country for all of us. Sunny and 65, in January? We are there!

Malta- I gotta hand it to you. We came for a long weekend, and you were quite surprising. A quick, sunny getaway was all we were hoping for to dry out and warm up our cold, damp bones. However...your rustic architecture, Mediterranean culture, azure blue water, and eye-gawking limestone cliffs made an imprint on my heart. There are only 500,000 of your people on the island, but man...were they warm and receiving of visitors.

A massive welcomed surprise was English being a main language. After living in a country where English is barely spoken nor appreciated, to hear a stranger approach you in your native tongue is music to your ears! I was also surprised to hear the mother language closely resemble Arabic instead of Italian. The cathedrals and temples peppered among the landscape hailed the Catholic and Muslim religions. We had exceptionally fresh seafood while we watched the little fishing boats bob up and down in the bay.

Another perk of traveling in the off-season is super cheap accommodation. Our modern and spacious AirBnB overlooked a gorgeous, rocky shore. The warm breeze in the morning was so refreshing and a glorious way to start the day.

But to be honest- even the most perfectly planned trip, can be completely turned upside down. I will ALWAYS be straight up with you guys...

We landed in Malta at 11pm. After tracking down the rental car three parking lots over and driving through cities we knew nothing about...with exhausted kiddos...after midnight...with little street-lighting...on a Friday night, left us a little antsy. Probably the worst roads we've ever driven on. So much so, our hubcaps were zip-tied to the tires. I kid you not!

The man at Avis laughed it off and said it was for good measure. No kidding, dude...no kidding.

We always shower before bed if we're flying. I just feel gross. So once settled inside our AirBnB, we shuttled the kids through the shower first. Little did I know, our hot water had a lifespan of around 8 minutes. And you guessed it, everyone got a proper shower but momma. I quickly hosed my body off with frigid water before crawling into bed around 2am...or so I thought.

We had individual room heaters, and ours shut off after an hour. Ughhhh. We've always divided the kids and slept with them. Have since we started traveling. So I got up and tried everything I could before waking up J to help. He finally got it running again around 3:30am. Sweet! Sleep!

Except, the kids coughed all.night.long. They aren't used to having any kind of air blow while they are sleeping. We don't have air conditioning back in Germany and our house has radiator heat. Plus, we use humidifiers in the winter. So, ohhh the coughing. Both of them were stuffed up the next day and continued coughing. We made the most of the day until just before dinner.

One of them was complaining of being cold. I mean, I was chilly because of the constant, cool, sea breeze. But this was more than that. He was shivering...and then felt hot. Ughhh again. He slept in my lap during dinner and didn't eat hardly anything. Got everyone back to the apartment and straight to bed.

No less than an hour later- coughing led to crying led to vomiting (everrrrywhere) led to super high fever led to sleeping on couch led to researching hospitals led to little sleep for mom and dad.

I wholeheartedly believe the above saved us from a Saturday night ER visit in a foreign country. Crushed up a few tablets, mixed in yogurt, and stuffed it down our son. The rest of the fam took a tablet for precaution, and we all steered clear. Woot!

We only had two full days in the island country, and our second one was half jeopardized from stomach sickness. Come noon the next day, he felt pretty much back to 100%. Since we didn't want to spread any possible lingering junk, we spent the afternoon in the sun getting fresh air at a sparsely populated beach and driving to an archaeological wonder. 12 hours later, all smiles and full of rock-climbing energy.

Even with random mishaps- you can salvage a short getaway. Set low expectations when traveling to any new place and keep an incredibly open mind. It keeps stress low and makes the adventure run more smoothly.

We had originally discussed a trip to the aquarium, a drive to the north end of the island, and a possible ferry ride to Gozo. All of those got tossed out the window, and we had to play it by ear. Which is okay!

We stayed in Xghajra and only saw a small portion of the already small island nation, but here is what you definitely need to put on your list of MUSTS in that area!

I won't lie. It's a bit of a crazy, bumpy ride. Remember the roads leave little to be desired?? Ooof. But once you are there and hike down a bit, the cut out of this view is spectacular. Said to be a great swimming hole for the brave during summer. Worth all the potholes in the world to see!

I forgot to take a picture- hence the lovely stock photo. But I had to give you a glimpse of the beauty. We spent our last night here and had a fabulous seafood dinner at Roots. The sea bass J ordered was brought out of that display in front of the door and sizzled to his liking.

Guys...very few landscape pictures have literally taken my breath away. This was one of them. It's an easy park and walk 100 meters down. All paved and well-kept lookout. If you want to take a boat through the cave, drive around the bend and park atop the arch. There's a tiny cafe to grab a coffee while you wait. Seeing it from above was perfect for us though.

...and while taking it all in, my big boy picked some weeds flowers for momma. Swoon ❤️

The boys knew we were on an island, and all they wanted to do was go to a sandy beach. Even though our water view was gorgeous rocky cliffs, there were sandcastle-building beaches everywhere. A quick Google found us at Pretty Bay. It doesn't have the best view, but was kind of comforting having previously lived in Singapore. The largest port in southeast Asia resides on the Singapore coast, so shipping containers didn't bother us a bit. Was ironic to see a fort from the 1500s directly across from the shipyard though. Plus, there is a massive playground and skate park behind us. Cute cafes, shops, and bars outline the surrounding area as well.

There is no lack of ferries to choose a day venture in Malta. I highly recommend the one to Valletta. It's super quick and a fabulous sight to absorb Pinto Wharf. Valletta is the capital city of Malta and will pleasantly remind you of old world communities with shiny cobblestone streets, cozy vertical homes adorned with slender doors, and fab European eateries.

Some parts of Malta predate the Egyptian pyramids, which is absolutely fascinating to me. However, most of the country is dotted with forts, walls, and sites of military encampment. Upper Barrakka Gardens will give you the best views overlooking the famous "Three Cities." Fort St. Elmo can also be seen (from the boys' vantage point complete with cannons) and dates back to the Ottoman Empire. It is shaped like a star and looks out over the harbor of Valetta to protect it. However, the Siege of Malta took place on those hallowed grounds and was an insanely bloody period in history where over 1500 knights lost their lives in 1565.

Our weekend in the sun was nothing short of amazing. We were pleasantly surprised by everything around the corner- except the roads. Dear me. Be prepared if you go. My back still aches. Ay yi yi. But so many things left to do -- diving in Comino, admiring centuries old Cathedrals, exploring Temples in Gozo, or maybe hit up the annual MTV music festival in July. Maybe. Getting too old to run with the youngins'

Want more tips on how to prepare for life abroad?

How to Prep and What to Expect at Birkenau
SIX REASONS: Why You Should Get Off the Resort in Thailand

No-Brainer Ways to Save for Travel RIGHT NOW
SIX REASONS: Why You Should Get Off the Resort in Thailand
Girls LOVE Travel- Enriching Your Experiences Abroad
Chasing the Sun in Malta
Easily Covering Croatia - North to South in Seven Days
Racism: It Starts at Home
Stranded Abroad While Traveling
8 Creative Ways to Survive Quarantine as an Expat
Long-Term Effects of Living Abroad and What To Do
Traveling? Never Leave Home Without This One Life-Saver
How to Prep and What to Expect at Birkenau
1 2 Next »