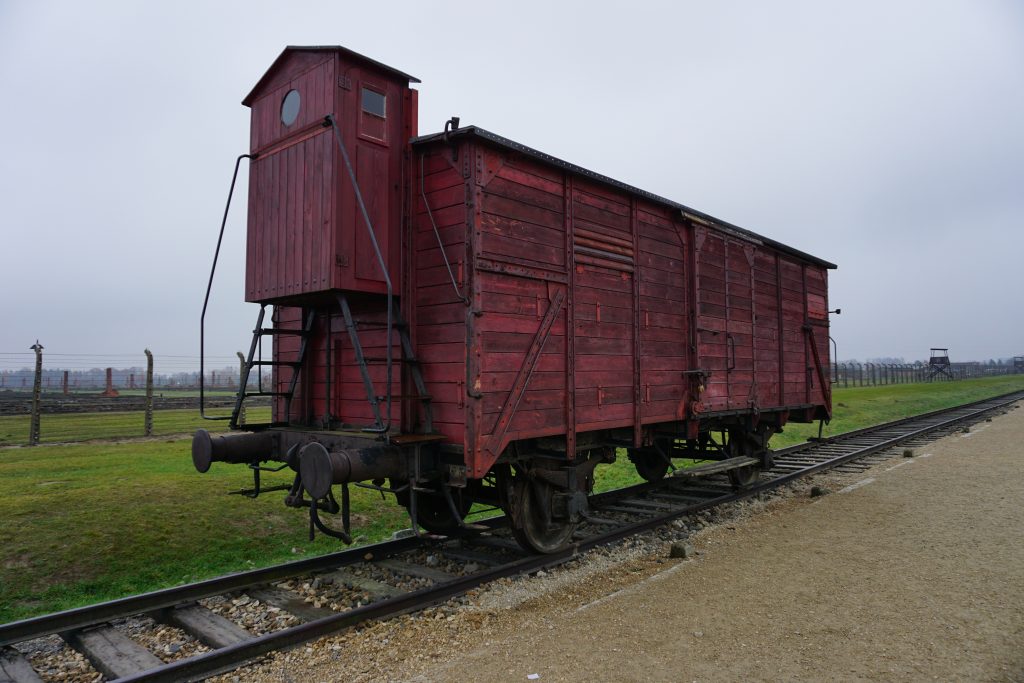 Upon completing our tour of Auschwitz and having a moment to compose ourselves, we boarded the bus and headed over to Birkenau. It's a short drive. Giving you a brief second to collect what thoughts you can before stepping off the bus onto yet another intensely profound set of soil. A heavy rush of helplessness and sorrow will suddenly envelope your soul once again. A tour of the Birkenau camp often follows a glimpse of Auschwitz.

Doing the two-in-one set of tours is a great way to capture a quick yet comprehensive view of both camps. However, Birkenau looks vastly different than Auschwitz.

It was quickly constructed due to overcrowding at Auschwitz. The need for more housing and a quicker path to extermination brought about the completion of Birkenau. Long (stable like) barracks were created to house prisoners.

The three-tiered bunks, originally intended to sleep three lying flat, shifted to seven bodies per bed only able to sleep on their sides. Read the fine print.

Unscreened outdoor areas were the only option prisoners had of relieving themselves until four toilet barracks were installed with 58 concrete openings.

As a visitor, you witness and hear much of what occurred during the daily life of a prisoner. One mention which stuck with me -- prisoners would file into the toilet barracks 58 at a time each morning. The guard would give them a ten second count down, and that was it. Up and out, to provide time for the next batch of prisoners to do their business. No lighting, windows, or heat during the winter - only open skylights above provided slim rays of light. And of course, no toilet paper.

Sanitary conditions were putrid. Damp conditions bred lice and rats; contagious diseases were rampant. The kitchens only had access to water, so the prisoners were very dirty and the stench was almost unbearable.

Birkenau was the largest of the camps set up under Auschwitz. Initially intended to house 125,000 prisoners, the camp ended up exterminating 90% of the people who came through during its three years of operation. Approximately 1 million souls lost their lives at Birkenau during that time.

The blunt business of Birkenau...it was crafted as a killing camp. When passengers exited the train, they were divided up as men, women, and children. Stripped of their clothes in hopes of a shower. Some had traveled as far away as Norway and spent up to 12 days squished into a train car with little food, water, and zero access to bathroom facilities. I can't imagine the rancid smell from human waste alone. Most were eager for that promised shower and went obligingly.

Their belongings sorted and later sold or trashed. A few select individuals were saved for unspeakable medical experiments due to their uncommon features, such as eye/hair color, height or weight. Twins were an anomaly and considered sacred for such experiments.

The grounds which Birkenau sits upon is expansive. You will walk plenty. Similar to Auschwitz, we toured the gas chambers, ovens, and stopped to shed tears over the areas of strewn ashes. It's heavy. Very very heavy.

After the war, the stables were burned only leaving the chimneys.

One of the gas chambers was bombed in an effort to cover up the horrendous happenings during those terrifying three years. Much of the land, tracks, and what is left of the buildings are preserved for tourists.

I will tell you...when they make the call for the last bus, you better high-tail it out of there. That is one place I would never want to be left alone.

1.) Comfortable shoes- this is an absolute must! You will do more walking here than at Auschwitz. 99% will be outside. My visit was cold and rainy, so make sure they can withstand the elements.

2.) Don't Smile. Take pictures if you feel so obliged, but please refrain from making this seem like a happy moment in your life. This sounds trite, but there was a girl a few years back who posted pictures on social media of herself cheesing in front of the ovens. Don't be like that. It's highly disrespectful, not only to those who suffered and ultimately lost their lives, but also to the visitors. Many of the guests touring the grounds have family who perished during the holocaust. I can't imagine how they must feel in a place like this. The only picture I took of myself below:

3.) Bring a Water Bottle- Between the overwhelming emotions and walking, you will want a refresher.

4.) Do Your Research- Much like Auschwitz, you will see and hear things. Deeply heavy, intense things. At one point I found myself paralyzed by my emotions, and I had previously studied the happenings of these places. Get online. Read articles. Look at pictures. Go to the main website and peruse through before coming. Preparing your heart and mind prior to arrival is a must to make it through.

I left Auschwitz in sheer shock that something like this would occur...and for so many years. The disbelief was surreal. The powerful emotions that take over will never leave you. Describing a bad day after this experience is a perspective unlike any other. I highly recommend a visit. A short trip from Krakow.

Auschwitz
Chasing the Sun in Malta